Indefinite Detention: ‘Happening on your doorstep’

This was a speech delivered by Souleymane of the Freed Voices group to Jewish community members who gathered at the JW3 centre on October 7 ’15 to determine how best to respond to the ongoing refugee crisis. It was first featured on Detention Action page and can be read here. 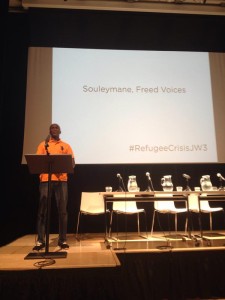 Good evening ladies and gentlemen. My name is Souleymane and I am a member of the Freed Voices group. We are a group of experts-by-experience committed to speaking out about the reality of detention in the UK. Between us we have lost over 30 years of our lives to immigration detention. I, myself, was locked up in detention in the UK, without trial, without time-limit, for three and a half years.

You are all here to discuss how the Jewish community can help those refugees and asylum seekers trying to come to the UK. I am very happy to hear this. From what I understand, helping the stranger is part of the Jewish tradition. It is part of Jewish values. But I want to talk to you tonight about my experiences as an asylum seeker already here.

I want to focus on my time in detention because this, more than anything else, has defined my experience of this country.

I came to the UK to escape persecution. Because I am stateless I had to use false documents to get here. When I arrived I was put in prison for a short time because of this. I thought when I left prison I would be a free man. I did not think I would be taken somewhere worse. Detention is worse than prison because in prison you count your days down and in detention you count your days up…and up…and up….and up.

The UK is the only country in Europe with no time-limit on detention. There is no end in sight. And this is where the mental torture really kicks in. The stress of indefinite detention had a huge impact on my mental health. It is like you are carrying a heavy load on your head everywhere you go.

I saw a lot of people around me collapse mentally. They could not take it anymore – the limbo in detention killed them. I saw people try and hang themselves. I saw people go crazy with fear. I saw a man take a razor blade and slash, slash, slash, he cut his arms. There was blood everywhere.

This is indefinite detention. This is happening on your doorstep.

Sadly, the mental effect of detention does not stop when the gates open. When I was released I felt like I had come out of a cave. I had been there so long I felt powerless and weak. I heard voices. I didn’t trust anyone. Even now, I sometimes wake in the night from flashbacks. The mental torture has not gone. I realise now that detention is a trauma – it stays with you for life.

The truth is there are many refugees and asylum seekers that need your help that are already here in the UK. There were 32,000 people in detention last year. 51% were released back into the community. Their detention served no purpose. The financial cost was enormous – millions and millions of pounds. You cannot even begin to measure the human cost.

Many of these people are now destitute or suffering on Section 4 support. They are still in a limbo. There are lots of organisations – like Detention Action and Rene Cassin – who are trying to help them. But we need as many people as possible to stand with us in this struggle. Because the truth is, things like detention affect us all. I am not saying you should stop giving charity to those abroad. But please also join the refugee’s fight for justice here, in the UK.

It’s time for a time-limit.