SupportRefugees
Blog
No comments yet

Rabbi David Mason is rabbi of Muswell Hill Synagogue. He visited Idomeni in Greece with the Chief Rabbi, Dayan Binstock, Rabbis Bergson and Boudilovsky and World Jewish Relief representatives to see the work that WJR is doing for refugees there.

How unpredictable world events can sometimes be from an individual vantage point. I only last Thursday visited a transit camp for refugees moving from places such as Syria and Afghanistan – and on Friday night, it is very possible that a Syrian traversing through Greece into Europe as a refugee was part of the coordinated terrorist crime that took place on Friday night in Paris.

I was however inspired by the Chief Rabbi’s comments this morning. He admitted that we need to be vigilant at our borders. But at the same time we need to recognise the need for life saving humanitarian interventions that many thousands, if not hundreds of thousands of refugees and migrants require on their path from the east, to a more stable life in Europe.

The trip to Greece was organised by World Jewish Relief. The idea was that we would visit the transit camp at Idomeni on the Greek-Macedonian border in order to see where WJR money is being spent on supporting refugees. A number of Synagogues, including our own, contributed to the WJR appeal at Kol Nidrei. WJR have now raised about £700,000.

World Jewish Relief work with a Greek NGO called Praksis who provide a whole range of humanitarian services to refugees in Greece.

Nearly 14 million people were displaced in 2014 due to conflict including 11 million internally displaced people (IDP’s) and nearly 3 million new refugees. The country presently with the most refugees in its border is Turkey with 2.1 million followed by Pakistan with 1.51 million and Lebanon with 1.15 million. Greece itself is usually considered by refugees as a place of transfer into the EU from Turkey. Over half a million refugees have travelled to Greece already this year and the total from January to August 2015 was a staggering 850% up on last year during the same period. Of all refugees coming through Greece, 91% are from Syria, Afghanistan and Iraq.

Have a look at this map.

As the land border between Turkey and Greece is shut, refugees who come from Turkey need to make a hazardous sea journey to one of the Greek islands closer to the Turkish shores. Dinghies are used that cram 50 or so into the space for 20 people. I met refugees who had witnessed people who had fallen into the sea and drowned. All those who make the journey come to the islands wet, many suffering from hypothermia and we heard from Praksis who work on Lesvos, that many suffer panic attacks when they come ashore on the island. This is the sort of journey only someone would want to make if they were desperate to leave their country of origin. Refugees then need to walk up to 70km on the island of Lesvos to a registration centre where they are given an ID certificate that gives them 60 days guest status to stay in Greece. In other words, their entry into Greece has been illegal, and the only way they would stay in Greece would be to seek asylum there. Many will find their way to Athens where they will receive NGO support. They will then find buses that will take them to the northern point of Greece, at Idomeni. This is where myself, Dayan Binstock, Rabbis Bergson and Boudilovsky accompanied the Chief Rabbi, with representatives of WJR. 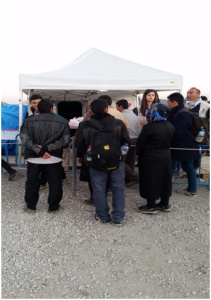 Buses of refugees would enter the camp and offload 50 or more refugees. They would then be given some food, nappies for young children and offered medical treatment if needed. We saw a number of refugees with bandaged wounds. They would in their groups then be given a number and asked to wait in what was labelled an ‘arrival tent’. There were 3 arrival tents and we were able in small groups to walk through the tents and chat with families and groups of people who were sat on the floor of the tents awaiting their number being called. They may have waited up to 2 or 3 hours there. Most of the refugees we saw had mobile phones. These were vital to all as they could keep in contact with family that were left back home, or talk to family who had already made the journey to somewhere in Europe. It may look to some as a sign of money, but Richard Verber of WJR put it that to refugees a mobile phone could be as important as food. I would also add that being a refugee was not just a label for people who were poor in their own country. The smuggling and the black market around so many of the services needed on the way meant that those who had money already before the journey may be able to make the journey.

When the time came for a group to be called, they would move to the departure tent. Then after a while they would be asked to sit on the dust road leading into Macedonia (or FYROM – Former Yugoslav Republic of Macedonia). After 15 minutes, the border would be opened by Greek police and Macedonian guards would let into Macedonia between 50 and 100 refugees. After a 10 minutes’ walk they would come to another refugee centre, where they would register for guest status in Macedonia and continue their journey. 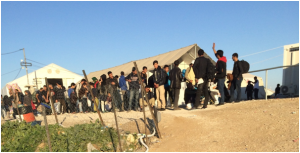 A group of refugees moving to FYROM border

What was so beautiful for me about talking to refugees (those who had some English) was that were truly being faced with human stories, below all the geo-politics that exists in places such as Syria and Afghanistan. This was for real. We met Shahab from Iran whose father was denied a passport and whose family therefore could not find work there. We met many Afghanis who were fleeing from the Taliban and ‘Daesh’ (The Arabic acronym for Isis). We met a young Afghani who had heard that ISIS were coming to conscript and so hid underground for 2 days before escaping towards the border with Iran. We met Mohammed who had left Afghanistan and had not seen his wife and 3 kids for 4 years. I saw a man with his elderly mother – on asking him where he was from, he said that he had come from Syria, where his brother and father had been killed by ISIS. One man, when I asked him, exclaimed in his Arabic ‘Asad calba, Asad calba’ which means, ‘Assad is a dog’ – he had run from the regime’s bombing, not ISIS. We met an Eritrean who told us he had been conscripted for 21 years into the army there and wanted to escape that reality.

There is the perception that most will end up in Germany, and we know that Germany has taken the lead on accepting refugees. But most of the say 25 individuals that I spoke to talked of Norway, Denmark, Austria, Switzerland, UK as well as Germany. Many did not really know where they would end up. 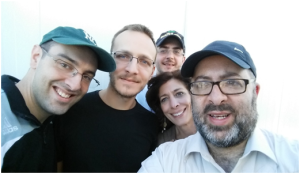 We also learnt a great deal while in Greece about the complicated nature of disbursing humanitarian way in an efficient and accountable way. Josh Simons of WJR was able to explain how the system works with his background in humanitarian work and explain also how the UN Humanitarian support system works. We were able as well to be involved in some small way in the Idomeni camp through handing out food to refugees. We also chatted with the resident Doctor who ran a medical van funded by WJR through the Praksis NGO. Families were using this service for medical attention while we were there.

The purpose of this trip, for our Chief Rabbi, was for us to maintain engagement with the refugee issue back here in the UK and look for ways that our communities can support those who are seeking asylum here, as well as the hopeful flow of Syrian refugees that our government has promised. The trip last week has inspired me even more to advocate for a greater consideration of how we can help the many hundreds of thousands of human beings on the move. Of course, the ideal solution will be the resolution of the Syrian conflict. But that is far off in the distance from a geo-political perspective. I simply cannot forget the ticking clock of refugees – nearly 100 moving on from Greece every 15 minutes. We were in the middle of an inexorable, unstoppable flow of human beings. At their most vulnerable, not really clear where they would end up. 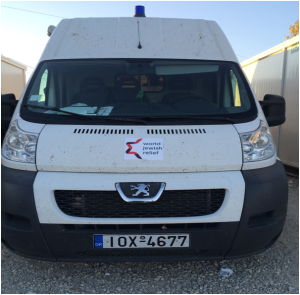