Nic Schlagman is the Community Projects Manager at West London Synagogue and recently visited The Jungle in Calais with a number of volunteers from Marom. 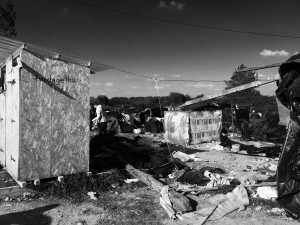 It is not easy to find the correct words to describe our recent visit to the refugee camp in Calais. Despite now numerous conversations with friends and colleagues the right words, the right tone, the right message still seems hard to grasp.

We volunteered. This helped. We were useful, which felt good. We saw abject poverty, sat in a cul-de-sac of the refugee migration and saw tears and pain, none of that felt good at all.

We arrived early in the morning at a large warehouse on the edge of Calais being run by the three local NGO’s (charities), who have been helping the refugees and migrants living in Calais for a number of years. Since the explosion of media attention on the issue they have been inundated with donations and volunteers and have been able to significantly upscale their operations. We arrived with two vans full of donations which had been collected by West London Synagogue, Northwood and Pinner Liberal synagogue as well as a local church and local mosque in Northwood. 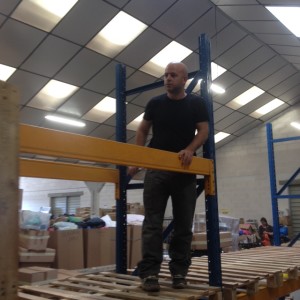 We unloaded quickly and got to work in the warehouse sorting through donations, packaging boxes and building more stacks of shelves. Doing our best to maintain order in the semi chaos of jumbled bin bags coming in, and sorted donations going out to the people who need it most. The NGO’s estimate that up to two hundred people can arrive in the camp every day, and the numbers there have grown significantly since the start of the year. The volunteers we met were warm, kind and organised. They come from across the UK and France and many have been there for weeks, even months, working hard to make a difference. There were also a number of refugees, friends made during the weeks of hard work, helping sort donations and taking a lead role on organising the distribution of tents, blankets, shoes, and clothes into the camp.

It was also during our unloading of the vans that the most surprising interaction, and perhaps most useful advocacy of the day occurred. One of the British volunteers approached our group as we were unloading to inform us that the donations being sorted and distributed from here were going to mostly Muslim refugees from Syria and Afghanistan, and also to tell us that there were no Jewish refugees in this camp. A number of our volunteers were wearing kippot – we were not hiding our faith. We informed him that we knew this and patiently explained that this collection had come from a number of synagogues, and that we represented a cross section of British Jewry who had come together to help because these were humans in need. Because we remember our own history.

He was genuinely shocked, this was not the way he thought Jews behaved. I reflected that the way Israel is portrayed in the media, and the way that the Left in Britain view Israel, Zionism, and Jews by extension gives a warped view of our values and interests. Further it is clear to me that we have to be in these spaces, without a song a dance, just making a difference in all the ways we can. This is how we can tell a different story. We are, understandably, a cautious and inward looking community with a strong need to focus on self-preservation. This is not, however, the sum of what we are about. We were refugees, we remember, and we want to help.

In the afternoon we left the warehouse and headed over to the ‘Jungle’ – the refugee camp of four thousand residents in Calais for a heavy dose of reality. This is not the first refugee camp I have visited, and it was not nearly the worst living conditions I have seen people surviving in. What I had to remind myself of was that I was a three hour drive from London. Closer to my home than my in-laws in Leeds. Thousands of tents sprawled across a wasteland, ramshackle huts built from wood and tarpaulin, dozens of people congregating around a generator with hundreds of mobile phones plugged to ever increasing splitters and adaptors. Ten water taps for the camp with long queues behind each, makeshift showers set up by ‘Doctors of the World, volunteers buzzing around whilst young men from across the Middle East and Africa sit staring into space with the look I know only too well from my years of work with refugees. People with nothing happening, with only their thoughts and daydreams – wherever those take them. No smiles.

We had been told to go there and speak to people, that this helps lift the dull monotony of the days, this reminds the people living there of their humanity, their curiosity, their humour. We entered the camp into a small square with tents around it and a group of guys sitting on a collection of plastic chairs. I said hello and introduced myself to Adam and Hamdi from Darfur. We exchanged some pleasantries and they invited us to sit down. One other was sent off to fire up the stove and put on some tea. We must stay and be hosted they told us. In all my work in places of significant poverty the importance of hosting visitors and making people feel welcome is rarely diminished. We spent an hour there talking. Hamdi was 25. He had seen his village destroyed when he was a teenager and had been living with the family who made it out in a IDP (Internally Displaced Persons) camp in Sudan ever since. His family (including possibly some family abroad) had finally saved enough money for him to set off for Europe to try and get refugee status here and start to build a life that might eventually see him be able to send money back for a next family member to come – to see how much of the family might eventually be saved.

This had been the story of my great-grandfather who had come first to Britain and established a butchers shop in Bethnal Green before managing to save enough for two sisters to join him. The rest of family to be sadly swallowed up by the Holocaust. Hamdi had been in Libya and cheated death at the hands of the smugglers and the fighters in the civil war. He had crossed by boat to Italy and survived. He had been chased out of Italy by thugs and beaten. He was smartly dressed in a shirt and woollen vest. At times in our conversation he had dreams – a home, studies and a degree, a family. At other points he stared off quite blankly and said he just wanted to rest, to feel safe, to be quiet. After tea we thanked our hosts and headed off to see the rest of the camp.

There is an Afghan café with a growing reputation on the central strip of the camp. In fact it sits alongside a row of small shops selling very basic provisions such as soap, toothbrushes, eggs and cigarettes. We went inside and four of us ordered lunch. Pilau rice, Afghan bread, and beans in a tomato sauce. It was genuinely delicious and served with a smile. The Afghanis we met were less friendly, and are famously reserved and cautious of strangers. Throughout this, and in fact throughout the whole afternoon, we always felt safe. I do not know why we felt that, or in fact if we were safe, but everyone we made eye contact with smiled and said hello. After this we visited the Ethiopian church in the centre of camp, an oasis of calm and contemplation. Inside a number of people were praying, some crying. How many loved ones have been lost on the journey to Calais, how many left behind in squalid camps, how many who never made it out of their beds when the murderers came. 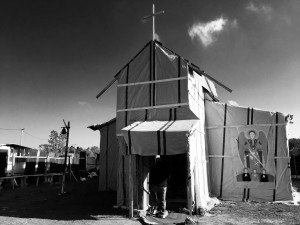 As the sun started to set we made our way back to our vans to make the drive home. No trip to Calais can bypass the wine outlet supermarkets to load up on bottles of Chateauneuf-Du-Pape. Each bottle set to grace our dining tables the equivalent of meals for dozens of people we have left behind.

The whole day is full of contradictions, of highs and lows, positives and negatives. I do not know how I am left feeling. It is not OK that people who have fled for their lives are left to rot on our borders when we have the capacity to help, but it is inspiring how many thousands of volunteers are making the journey to Calais to bring supplies, share humanity, break bread, and share smiles with the people living there.

Each person there has their own story, their own hopes and dreams, their own traumas. Refugees as a group term means nothing really, Syrian refugees, Eritrean refugees, nothing. We encounter individuals, humans, and we are asked to respond. It is not easy initially to meet someone from a totally different world to your own and open your palm to shake hands, to accept tea, to share your own life and hopes and dreams. The incongruity is overwhelming and unsettling. I have no answers for Calais, or for the world refugee crisis. I just know I can keep meeting Hamdis and Sayeds and Sylvains and be myself, and smile, and break bread, and look them in the eye and walk a few paces together as equals. Then I go home.