Communal leaders have signed a joint statement expressing their disappointment in the government’s decision to stop allowing child refugees into the UK under the ‘Dubs amendment’ to the Refugee Act.

Lord Dubs – himself a child refugee on the Kindertransport to Britain in 1938 – proposed the amendment to the Immigration Act (2016); asking that Britain take its fair share of the lone child refugees in Europe.

The scheme was supposed to help some of the most vulnerable, and at risk unaccompanied children in refugee camps in Greece and Italy amongst other places, to keep them out the hands of traffickers, enslavers and other dangers they could otherwise face.

On Wednesday the government announced it would be scrapping the Dubs scheme with just 350 lone refugee children relocated to the UK. It was hoped at the time the ‘Dubs amendment’ was passed that 3,000 children would be relocated over a non-specified time period. 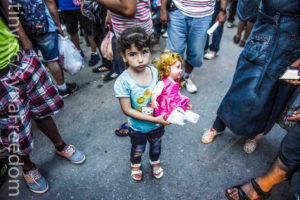 The Jewish community is bitterly disappointed by the news that the Government will be ending the Dubs scheme for relocating some of the most vulnerable refugee children in Europe. The Government is betraying Britain’s history of protecting vulnerable people seeking refuge.

When Lord Dubs – himself a child refugee to Britain in 1938 – proposed the amendment to the Immigration Act (2016), he asked only that Britain take its fair share of the lone child refugees in Europe. He hoped it would take in three thousand; we now understand that the scheme will end with only one tenth that number – a mere 350 unaccompanied children to be rescued from the clutches of traffickers, rapists and enslavers in refugee camps across Europe.

It is both disturbing and shameful that the Government has failed to honour its commitment to refugee children.  We also note that it is dragging its heels in relocating those children who have the legal right, under the Dublin agreement, to be reunited with close family here.

We therefore strongly urge the government to take two immediate actions: first, to reconsider its position on ending the Dubs scheme; and secondly, to ensure that the Dublin system of family reunification works faster and to its fullest extent, so that lone refugee children can be returned to parents and close members of their family in the UK.