It had been about five months since my last visit to Calais, volunteering in the warehouse and visiting the ‘Jungle’ camp. Hundreds of volunteers lined the warehouse in September 2016 sorting the generous donations that had been sent to aid refugees in Calais. The mood in the camp was tense, the refugees very aware of the pending demolition of their community and temporary home. Only a week later the camp was demolished; its inhabitants evacuated, as our TV screens at home beamed the pictures into our living room. Five months on and all talk of Calais has ceased, one could be forgiven for thinking the refugee crisis is no longer relevant to the UK – that the closest refugees to us are in Italy and Greece. This could not be further from the reality of the situation – a significant number of refugees are in Calais and Paris, and are facing conditions that leave several longing for the temporary residence of a ‘Jungle’ camp. 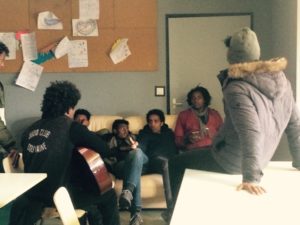 Leading a group of 15 on behalf of JCORE from London to volunteer for the day, we arrived in Calais around midday local time at the Care4Calais warehouse, where we welcomed by a noticeably small number of volunteers – especially small compared to last trip in September. We were briefed on the refugee situation in northern France – where nearly 4,000 refugees reside, either living in camps such as Dunkirk or on the streets and in parks. The whole situation is made worse by the French authorities emphasis on detention and deportation so as to discourage more refugees from coming, needless to say this hasn’t worked.

My role for the day was to go on ‘day patrol’ with a couple of other volunteers. We were told that more and more refugees are arriving in Calais due to camps in Belgium being closed; and that police in Calais would try detain them if they caught them. We carried around bags containing food, water, warm clothes, sim cards and other useful items like backpacks as we checked the train station, the bus stop and park for refugees arriving that afternoon. 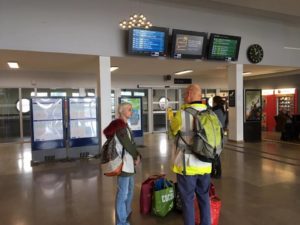 It didn’t take long to find refugees, different groups travelling separately, the two boys I was speaking to were from Iraq and were speaking Kurdish and were teaching me the words ‘Hello’ and ‘How are you’. They were telling me how much they love football (Real Madrid was their favourite team), and for how long they had been in France (4 months). They gratefully accepted biscuits water, gloves and a backpack.

Throughout the day I heard many stories of people attempting to board lorries. A 24-year-old Sudanese man, with a huge smile and shoes four sizes too small and his Eritrean companion were telling me about their attempts to board lorries just 11 hours earlier. They were excited on finding out that Lucy, with whom I was volunteering, was from Manchester: ‘Manchester United are the best! Zlatan!’ they were saying, but as they waited at the bus stop (I think for the police to stop guarding the station so they could jump on a train), they become quieter and a bit more reflective. The 24-year-old dejectedly told me he’s been in France for 1 year and 4 months and doesn’t think he’ll ever make it to England. But he hopes the French authorities will allow a camp to be remade after the French presidential election, telling me that at least that was better than the situation now, translating from Arabic on a google translate app.

I spoke to around twenty refugees throughout the day, each with unique stories, interesting and terrible in equal measure, the common theme was that many felt very alone – neglected by the French especially, but they were always grateful for food, the supplies and to have someone to talk to – to know that at least some people cared.

My biggest takeaway is that people have forgotten about Calais, people have forgotten about the human beings that face enormous peril. People have been struggling to exercise empathy because they get information from the media and authorities not from direct contact. People haven’t tried to picture leaving their nice warm home, with one small bag, and maybe some documents to escape from guns, wars and bombs, travelling from Sudan or Eritrea to Libya – through Libya – the heat, the terrain and all, to get somehow to Italy – probably having to be smuggled due to lack of legal routes. They haven’t pictured where they would sleep or how they’d navigate a country without the language, without any money to get themselves somewhere that you could not only be safe, but live some form of a meaningful life with dignity. It’s only upon really seeing the human element and trying to empathise that attitudes will change, and people will realise that we need to do something to help normal human beings who have been put in this position by the misfortune of where they have been born.

This is why more people must go to Calais and observe the situation – and must volunteer with organisations like Care4Calais who carry out such incredible work. Because the dismantling of the ‘Jungle’ was not the end of the situation in Calais, but another dangerous stage in the life of refugees, determined to survive and to make a life for themselves. We have been naïve in thinking that the end of the ‘Jungle’ meant that the problem had gone away, because it hasn’t and in fact it is worse than ever for those who have already been through hell and it will continue to worsen if we continue to turn a blind eye to it.